On Thursday, March 16th, the New York City Mayor’s Office of Media and Entertainment (MOME) and BuzzFeed announced Chimamanda Ngozi Adichie’s Americanah as the winner of the inaugural “One Book, One New York” program. Throughout February, nearly 50,000 votes were cast for this first-of-its-kind competition. And, in the coming months New Yorkers will be encouraged 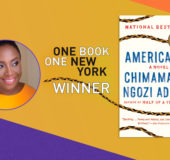