Kindred, by Octavia Butler, has been chosen by the University of Iowa’s General Education Literature program to be their feature title for a second year. The program focuses on helping students become comfortable reading different kinds of texts with historical, social, political and cultural contexts. It is geared towards non English majors to improve their reading and writing skills as well as generate interest in an English major. The overall goal is to create a perpetual habit of reading for students.

Octavia Butler (1947-2006) was one of the few African American women writing novels for the science fiction genre and the first science fiction author to receive the MacArthur Fellowship. She used this genre as a way to address social issues such as racism and sexism. Although she struggled with dyslexia as a child it did not deter her passion for reading and writing. Kindred, Butler’s most well-known novel, has now solidified its place in the world of Common Reads. Butler used her own observations of racism towards African American employees and slave narratives to write Kindred. She said, “I wanted to write a novel that would make others feel the history: the pain and fear that black people have had to live through in order to endure.”

Kindred focuses on the theme of racial tension in the twenty first century and in the antebellum era. The main character, Dana, is a modern day black woman who gets sucked back in time to a period where slavery is still a part of everyday life in the south. It’s a social criticism that asks readers to face the horrors of slavery and explore the impacts of racism, sexism, and white supremacy then and now.

“The General Education Literature program at the University of Iowa selected Octavia Butler’s novel Kindred (1979) as our feature title for the 2018-2019 academic year. Our primary goal as program assistants was to select a text that we felt would be interesting and accessible to a diverse group of first-year students. Our secondary goal was to choose a text that instructors could adapt into a broad range of course themes. Out of the five novels under consideration, Kindred best met both criteria. The traditional structure of the novel allows students to follow and identify essential information regarding plot, setting, and character, but the less traditional approach to subject matter meant that instructors could teach the text in courses focused on science fiction, feminist literature, the context of the Civil War, American supernaturalism, Black genders and sexualities, and many others.

To our delight, the general reception of Kindred was positive among students and instructors alike. Instructors felt it fit well with the other literary material taught in their courses, and lent itself easily as a text amenable to both written assignments and creative projects. Students described the novel as ‘entertaining,’ ‘easy to read,’ and ‘my favorite book this semester!’ They became especially invested in parsing the complexities of characters they initially wanted to instantly label as ‘good’ or ‘bad,’ only to discover that Butler was not going to make such labeling simple. This was yet another reason we selected Kindred as a feature text: it managed to be an engaging read while defying any attempt at easy categorization. It required teachers to be creative in their approach to its form and the issues it raised, and it required students to think more carefully about how they approach a story and the various contexts that influenced its creation.

Overall, we are confident that Kindred was an excellent feature text for our General Education Literature program this year, and would recommend it to any instructor looking for a book that will keep students’ attention—especially those who may not be self-described ‘readers.’” 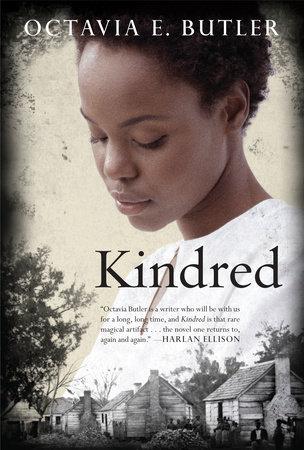 Kindred
Octavia E. Butler
978-0-8070-8369-7
Fiction - Science Fiction - Time Travel
Fiction - African American - Women
Fiction - Historical - General
The visionary author’s masterpiece pulls us—along with her Black female hero—through time to face the horrors of slavery and explore the impacts of racism, sexism, and white supremacy then and now.Dana, a modern black woman, is celebrating her twenty-sixth birthday with her new husband when she is snatched abruptly from her home in California and transported to the antebellum South. Rufus, the white son of a plantation owner, is drowning, and Dana has been summoned to save him. Dana is drawn back repeatedly through time to the slave quarters, and each time the stay grows longer, more arduous, and more dangerous until it is uncertain whether or not Dana's life will end, long before it has a chance to begin.
$16.00 US | $18.00 CAN
Feb 01, 2004
5-3/8 x 8
Paperback
264 Pages
Beacon Press
US, Canada, Open Mkt
Tags: African-American, american literature, Historical Fiction, women of color
Related articles