We are pleased to announce Lentil Underground has been selected as the common read for the Griz Read 2017 program!

27-year-old David Oien decided to take a stand against corporate “big-box” farming by planting a radically different crop: organic lentils. Today, Oien leads a network of organic farmers who form a million-dollar enterprise that sells to hundreds of natural foods stores and restaurants.

This inspiring story of colorful pioneers from the heart of Big Sky Country shows how banding together dramatically changed the future of American agriculture.

Find a schedule of events and information on the Griz Read essay contest here.

“[Lentil Underground] tells the fascinating story from one corner of the ongoing rural renaissance—it will resonate and fascinate, and it will leave you looking for ways to get involved yourself.”—Bill McKibben, editor of The Global Warming Reader

“Who’d have thought that a book about lentil farming could be a page-turner? With a voice as clear and powerful on the page as it is onstage, Liz Carlisle writes the struggles of Montana’s farmers as an epic. Their battles with food, finance, health care, and modern capitalism are both inspiring and a timely reminder that populism needn’t be a dirty word.”—Raj Patel, UT Austin

“All of civilization rests on agriculture, and so it follows that real revolutions begin in the soil, which is why the stories of real revolutions must be reported from the ground up, as Liz Carlisle has done so competently in Lentil Underground. Read it, engage the real revolutionaries and begin to understand why their work is so vital to all of us.”—Richard Manning, author of Against the Grain 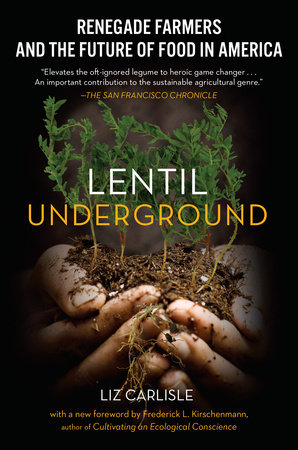 The solutions exist, are economically viable, and communities throughout the world are currently enacting them with skill and determination. If deployed collectively on a global scale over the next thirty years, they represent a credible path forward. First-Year Reading: The Environment
May 19 2017

Ken Ilgunas delivers an unforgettable tribute to the Great Plains and the people who live there with this account of his journey along the proposed Keystone XL route.