By Jon Ronson, author of So You’ve Been Publicly Shamed (Riverhead Books, March 2016)

In 2015, just after So You’ve Been Publicly Shamed was published, I gave a talk in Santa Cruz, California. I was telling stories from the book, about people getting ripped to shreds on Twitter for some minor transgression, some joke that landed badly. These people would lose their jobs, their reputations. Their mental health would be in tatters. Anyway, as I recounted these stories a strange thing happened. An elderly lady in the front row kept trying to catch my eye. When she did she robustly shook her head in disagreement with me. In fact she was shaking her head practically nonstop for the entire talk. When it was time for the Q&A her hand shot up. She said, “well if you play with the Twitter toy, it’s your fault if you get hurt.”

Twitter has created a milieu where each side tends to rain down vengeance and anger as its default position.

Eighteen months later, and I don’t think anyone sees Twitter as a “toy” anymore. For a company that’s in some difficulty, its impact on the world has become profound. We now have a President who routinely Twitter-shames his opponents, even when they’re powerless private individuals.

At the end of 2015, for example, a young student named Lauren Batchelder stood up at a political forum and told Donald Trump that she didn’t think he was “a friend to women.” The next morning—as The Washington Post later reported—he went for her on Twitter, calling her an “arrogant young woman.” As a result, she was bombarded with rape threats and death threats: “Wishing I could f—ing punch you in the face. id then proceed to stomp your head on the curb and urinate in your bloodied mouth and i know where you live, so watch your f—ing back punk.” And so on. She went into hiding.

Somewhat ironically, Melania Trump recently told a rally in Philadelphia that as First Lady she wants to tackle social media bullying, because it has “gotten too mean and too rough.”

But it isn’t only the right that’s at fault. Twitter has created a milieu where each side tends to rain down vengeance and anger as its default position. And that milieu has infected other social media sites—Facebook, in particular—and the mainstream media too. Sometimes the mainstream media, as if unsure of its role in this new world, seems like the nerdy kid sucking up to the school bully. Some of the most brutal recent shamings have come from the left. Pro-Trump sites like Breitbart and Infowars propagandized the hell out of these kinds of shamings in the run up to the election, because they knew it was an Achilles heel, an unlikable and frightening tactic. I’ve no doubt it’s one of the reasons Trump got elected. I think we all polluted the waters, and he emerged from them like a three-eyed fish.

Twitter’s impact on the world has become profound.

Twitter has become a stage for constant artificial high drama, where every day a new person emerges as either a magnificent hero or a sickening villain. It’s a real problem. It robs people of their humanity and legitimizes certain types of bullying. Sometimes the transgression is a serious one, sometimes not, and society is losing its capacity to distinguish between the two. As President Obama said last July, “we watch positions harden and lines drawn and people retreat to their respective corners. We see all this, and it’s hard not to think sometimes that the center won’t hold.”

I especially enjoy talking about this stuff on college campuses because I think a more centrist, humanistic, empathetic message is needed right now. We have always had some influence over the justice system, but for the first time in 180 years—since the stocks and the pillory were outlawed—we have the power to determine the severity of some punishments. And so we have to think about what level of mercilessness we feel comfortable with. I think my job is to remind people that we humans are clever and stupid. We’re a mix of flaws and talents and sins. We’re grey areas. JON RONSON’s books include the New York Times bestseller The Psychopath Test, and Them: Adventures with Extremists and The Men Who Stare at Goats—both international bestsellers.

The Men Who Stare at Goats was adapted as a major motion picture, released in 2009 and starring George Clooney. 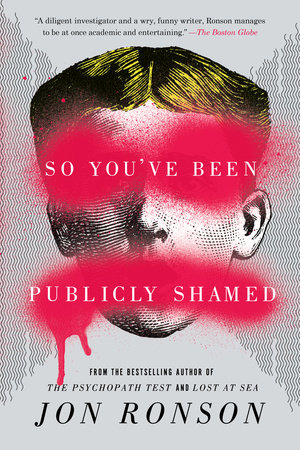 So You've Been Publicly Shamed
Jon Ronson
978-1-59463-401-7
Social Science - Popular Culture
Psychology - History
Psychology - Interpersonal Relations
For three years Jon Ronson, author of The Psychopath Test, traveled the world meeting people whose mistakes or lapses in judgment were met with a firestorm of collective outrage enabled by social media—often with profound consequences on their lives. In So You’ve Been Publicly Shamed, he explores their stories and delivers an incisive critique of modern-day shaming as a form of social control and as a war on human nature and its flaws.
$17.00 US | $23.00 CAN
Mar 29, 2016
5-1/2 x 8-1/4
Paperback
336 Pages
Riverhead Books
US,CAN,OpnMkt(no EU)
Tags: Bullying, Current Events, Social Media, Twitter
Related articles Auburn University has chosen The Circle by Dave Eggers as their 2017 Common Book. Auburn is the 26th college or university to select The Circle for their common reads program. This novel, which is soon to be a major motion picture, follows idealistic Mae Holland after she is hired to work for the world’s most powerful